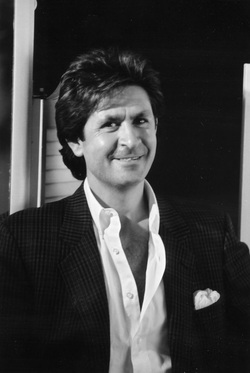 Adamo Lentini found himself cutting hair at the age of 14, and he hasn’t stopped since!
He was intrigued by the creative process, so Adamo soon began his apprenticeship at ALBERTO D’ ARTIZIO, one of the best salons in Genoa. For three years, Adamo studied the rigors of color application, massage treatments, etc., while learning his skillful cutting technique. Seeking greater conquests when his apprenticeship ended, Adamo headed to Rome, the fashion capital of Europe, where he soon landed a position at ANGELO E TROTTA.  Angelo E Trotta was adjacent to the exclusive VIA CONDOTTI,  the exclusive street in the  heart of Rome.

As Adamo explains it, “They asked me how much experience I had, then provided a model in need of a hair cut and styling. I was barely half completed when the proprietors asked from that very first impression if I could start today? We truly need someone like you here.” His peers were amazed that such a young man was permitted to cut and style influential clients so promptly at a salon of such renown. The proprietors saw pure talent; six months later, they invited Adamo to share his techniques with students at the Styling school in Rome, an engagement he continued with the salon for three years.  Through his experiences in Italy then London  Adamo began developing the techniques that he uses in his presentations that now brings him recognition around the world.